Your pal OC went down a rabbit hole last week and started unearthing different royal portraits over the years.  How about we occasionally take a look at one royal’s portraits and have a chat about them?  We’ll start with Philip and go from there—feel free to send a suggestion in the comments for our next feature.

First up is this portrait by Rajasekharan Parameswaran, an Indian art director.  This may as well be a portrait of anyone’s grandfather, and I think that’s what draws me to it. 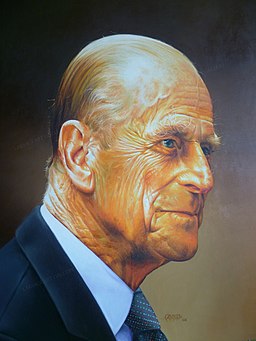 This painting of Philip in his role as Colonel in Chief of the Queen’s Royal Hussars was completed in 2012 by Jemma Phipps. His jacket must weight fifty pounds alone with all the medals. You can read more about here at BBC.

This portrait by Australian artist Ralph Heimans was released in 2017 and it is absolutely a stunner. So many nods to Philip’s family history can be found in this piece that I find it really touching. Never mind the fact that when it first came out I stared at it for a great while marveling at how this wasn’t a photograph. You can read more about the portrait at Vanity Fair.

What do you think of these portraits of the Duke? Are any of these your favorite? Do you have other images that you’d like to share? Tell us why your example is your favorite, or even just why it is interesting to your eye in the comments.